11th & 12th of February will forever stay in our hearts. For two days from dawn to dusk we raised money for Foundation’s causes at WNVR 1030 AM. This 12th Annual Radiothon right from the start felt differently and we new that the listeners will respond to our plead for their help. It is hard to express the atmosphere that was there at the radio station. The tension was growing with every single pledge and we could hardly wait for the final result. When the moment came no one was prepared for such an outcome: 120,000 dollars! This number well passed our expectations, anyone expectations for that matter!

Credit for such a success lies obviously in our Polish community but also in an enormous afford of lots of people involved in this project without whom it wouldn’t be possible. Our gratitude goes first and foremost to the owner of the WNVR 1030AM, Mr. Walter Kotaba who gave us two days of air waves for free. It is a costly and wonderful gesture and for that we will be always grateful. Also, we would like to express our deep appreciation to Ms. Joanna Bochenek – vice president of the Polamer for her support and personal involvement in this event as well as Polish TV Station Polvision with Ms. Joanna Pokropek for constant presence in Foundation’s life and day-to-day operations. Because of their combined support and care our 12th Radiothon could become a great and unprecedented success. It’s been a couple of days since these intense days and from that perspective we can say that success could happen because the listeners found our program interesting, honest, straight foreword and with a personal approach and responded accordingly. And we are deeply moved by that.

Very personal involvement of the radio’s staff played important role as well. Rafal Jurak – a lifelong and dear friend of the Foundation made sure that everything was under control and appropriate and kept our program well organized and meaningful. The same, very professional approach to the event showed Krzysztof Arsenowicz and Malgorzata Ptaszynska who have put lots of thoughts into their segments and it showed. Mr. Marek Rzepkowski, one of the best hosts on the 1030AM radio simply amazed us with his very creative and interesting talk show . What he has done for our cause was absolutely magical. It was a real pleasure and honor to work with these wonderful people.

There were the moments that we still are not able to fully process in our minds… If there’s a patron, a sponsor, simply a good human being who was moved so deeply that offered his $30,000 it is something. It was the biggest individual donation towards Foundation’s children to date. Just unbelievable! And just because he wanted to, after he won two beautiful gold necklaces with diamonds at the live auction, he decided to give them to Julia – one of Foundation’s children. Julia’s smile was as bright as the sun and it’s not because of the
gold but because she felt very special and important. And that’s what we always trying to achieve for our children: to boost their confidence and self-esteem by making them feel important and beautiful and loved.

On the Foundation’s side the program was hosted by : Dorothy Malachowski – president of the GFHF, Ewa Lechowicz – Secretary, Izabela Rybak – Treasurer, Marek Jezuit, Zbigniew Karas and Anna Piotrowska – members of the Board of Directors . Togetherness, enthusiasm, very personal and intimate approach to the event has helped achieve this financial success. These are people who were in the studio talking to the listeners. But what was going on behind the scene was equally important: there was a group of dedicated volunteers who picked up
all those telephone calls: Zuzanna Gnarowska, Agata Jira-Owczarzak, Rysia Skirucha, Halina Buchcar, Ada Kokocińska, Beata Wołczyńska, Ewa Betka, Jolanta Puszkiewcz, Anna Wojtasik, Luiza Karczmarczyk and Jacek Dąbrowski. Thank you for being so good.

To keep everybody in good condition couple of businesses made sure that the food is there for everybody to enjoy. Starting early Saturday Mr. Roman Krzemiński, a member of Zew Natury Outdoor Organization presented us with delicious, huge, smoked salmon that he prepared for this occasion. Mr. & Mrs. Stanisław Urbaniak, the owners of Montrose & Cicero Deli, donated fantastic sandwiches and hot meals; Zofia Zaborska and Barbara Orzeł, the owners of Staropolska Restaurant also donated hot meals on Sunday. Bogna Iwanowska-Solak – the owner of Oak Mill Bakery – showered us with , the best in town paczkis and cakes. We are very grateful for all those wonderful treats. Thank you.

To commemorate this year’s Radiothon we came up with the idea of making a CD that would include local Polish –American musicians and artists’ work. And we succeeded! With a help of the Firebeat, Maggie D, Volare, Skalar US, Piotr Marszałek and Arek Religa who let us use their recordings, Mateusz Malec of Radio 1030 WNVR could materialize our idea. Ms. Eva Betka sponsored the production of this unique and quite awesome CD. Over 200 was given away for the listeners who’s pledge was $50 or over. We thank everyone who was involved in
development of this project.

Those two busy and very special days proved once again that if the cause is genuine, meaningful and is about children in need, we all embrace around it and become one big family that cares. On behalf of the children whom we had a chance to assist already and those who are waiting for our helping hand we thank each and everyone of you for such an outpour of love and support. Because of you these children have lots of reasons to be happy. 120 thousand of reasons, to be exact! 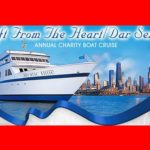